skip to main | skip to sidebar

Jillian Michaels, do you love her or hate her?

Around 2 months ago, I signed up to "learn to run 10k", so I started doing a workout DVD 3 times a week. I was doing Tony Hortons 90 day Beach Body at first, I had a DVD I bought for 2 dollars a few years ago, it was nice because it had weight training, and cardio sessions.

I also signed up a couple weeks later for a "90 day challenge" put on by a local radio station. It's pretty neat, the prize is HUGE, but I don't think I stand a chance to win it, I don't have as many inches/lbs to lose as most of the people I saw signing up.

A friend and I started doing the 10K training, and we were doing awesome, but I made the mistake of pushing it too hard one day when I was feeling good, and ended up in crazy pain for over a week from my knees. NOT a good idea to go from never running a day in my life, to trying to run for 20minutes.... So I just toughed it out at home, doing workout DVD's for awhile, switching between Tony Horton and another cardio one I had. I also went to water areobics a few times, so fun!

One day, I'm not sure how it popped into my head, as I'm not a huge "Biggest Loser" fan or anything, I decided I needed the 30 day shred. MAN Jillian kicked my butt! I LOVE her workouts, that they combine cardio and weights at the same time. The level 2 left my knees feeling pretty sore again though, so in incorporated a rebounder (those little trampolines) into my workout for the cardio parts, and so far so good! 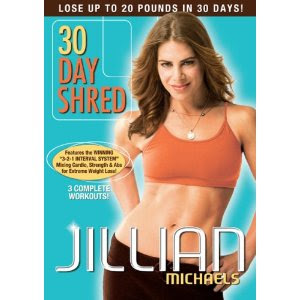 Since then I've tried the "Banish Fat, Boost Metabolisim" as well, and all I have to say about that, is if you think The Shred is hard, this one is brutal! The first time I did it I thought I was going to throw up half way through. I've done it around 5 times now, and that feeling has passed, but man it's tough! I tried to get some friends interested in it, but they all think I'm crazy I think. Has anybody else done The Shred, or the BFBM?
Scribbled by JeolsliesMomma at 10:51 AM No comments:

I decided to sew the girls Easter baskets this year, since they seem to distroy the wicker type woven ones, from carrying them around so much. They looooved these! I let the older of the two pick what she wanted sewn onto hers (A sheep and a butterfly) and I did a bunny for my little stinker. 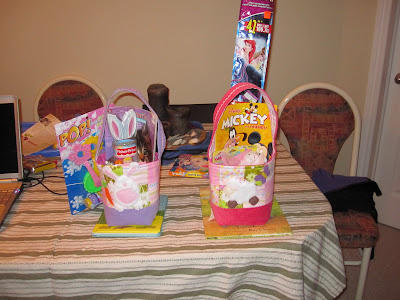 Full of the loot she got from good ol mister Easter bunny. 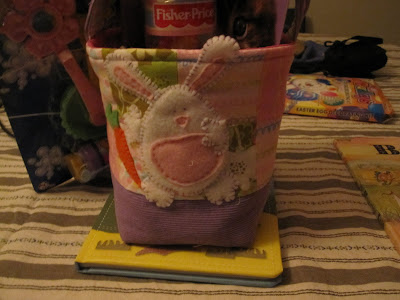 Close up of the bunnie and his carrot... I got a new camera, but obviously I'm still the worlds worst photographer. The purple corderoy that I used for the bottom/handle of this basket, came from some pants I used to have.... I can't imagine wearing them now. I remember getting comments every time I wore them 5 years ago *shudder* 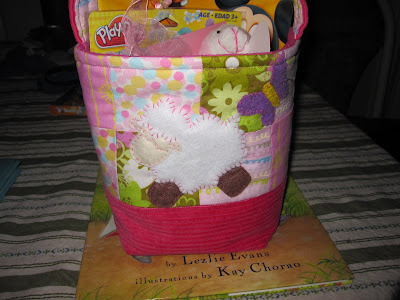 And the Sheep and purple butterfly. I ordered the cotton prints from Hawthorn threads, I love that site. The pink corderoy is left over from Josie's jumper.
To make them stiffer, on the cotton fabric layer, I used some of that nice cotton quilt batting that looks like felt. And for the lining, I used a peice I got in the remnant bin, of quilted pink poly/cotton. There's rickrack up around the handles. I wish I had had a chance to run to the store when I was finishing them up. I needed some of that trim you would use to keep the handle a little stiffer. I just put a peice of quilt batting in it, but I should have used that stuff instead (I can't remember what the heck it's called....)

Scribbled by JeolsliesMomma at 7:29 AM No comments:

I follow the Ikat Bag blog, which I love to peices, and awhile ago she had a "winter dress tutorial" which was sooo cute. I actually happened to find a pattern in my stash that was identical to hers, from when I was little and my mom used to make some of our stuff. I just adjusted it to be a bit longer, since it's for winter. 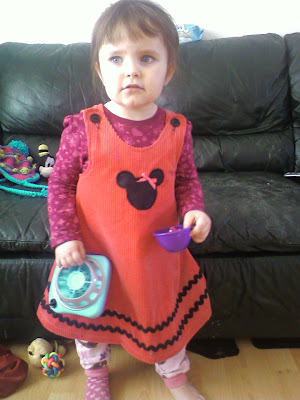 Of course Josie "aka Minnie Mouse" had to have a mickey themed applique on it. Pardon her one sock, pajama bottoms, random shirt that doesn't match. She saw the dress and HAD to put it on RIGHT NOW. 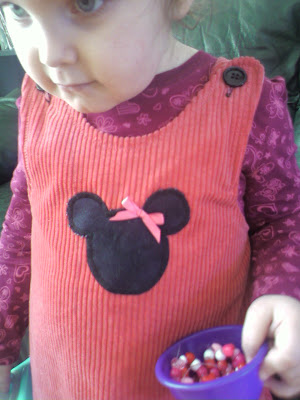 It's only the second time I've done machine applique, it turned out better then I thought! I was terrified to start, incase I went all crooked, bumpy, and other things that can go terribly wrong. She has a bowl of necklace noodles, and her little stir fry stove in her hands, and is intently watching, what else, "Mickey Mouse Clubhouse".

Scribbled by JeolsliesMomma at 3:21 PM 2 comments:

Quite possibly the ugliest hat, but it's growing on me.....

Firstly, this isn't the ugly hat, lol, this is the bonnet type one I knit for Ellie from "Boho Baby Knits" 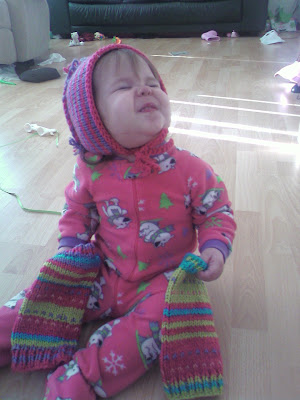 And some matching legwarmers... It appears to just be a normal, cute bonnet from the front, and then...... (love Ellie's pose!) 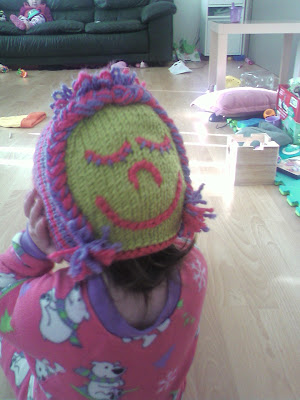 Boo! It's a sleeping baby face on the back! I LOVE this one. 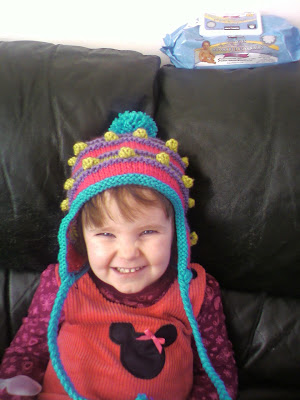 This one on the other hand, looked cuter in my mind. It kind of suits my crazy Josie girl though.....

Scribbled by JeolsliesMomma at 3:15 PM No comments:

Josie had her party on her actual birthday this year. She's quite the Diva and I didn't want her thinking she got more then one birthday a year, lol! Once she put on her dress in the morning to get ready, she was no longer "Josie" she was "Minnie Mouse". "Momma, I want a snack..." me - "O.K Josie, just wait a sec"... Josie "Momma, I'm not Josie, I'm Minnie Mouse, and Minnie Mouse would like some juice too please". 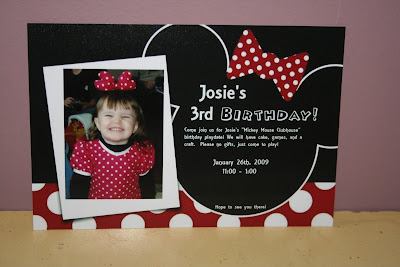 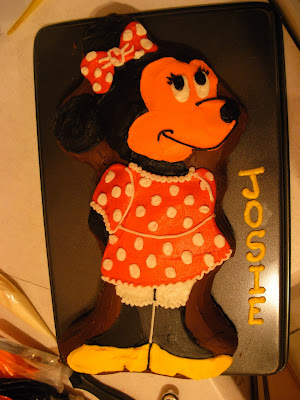 I made a dairy free cake, it turned out really yummy! Minnie Mouse, on the other hand, looked a bit sun burned. I don't know what I was thinking when I dumped in the amount of "soft peach" wilton food gel coloring. I was very tired, and for some reason I figured, since the color on the jar was so light, that was the lightest it would come out no matter how much I put in, WRONG!.... I didn't have any extra icing left at that point either, crap! 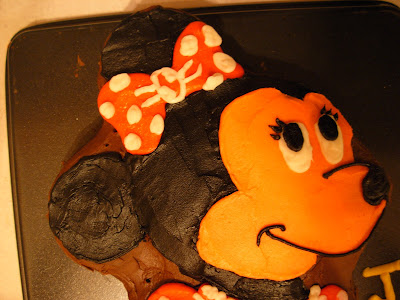 Terrible lighting, but if you can imagine, it only got worse after I put it in the fridge for the night... like she stayed up in a tanning bed while we slept. 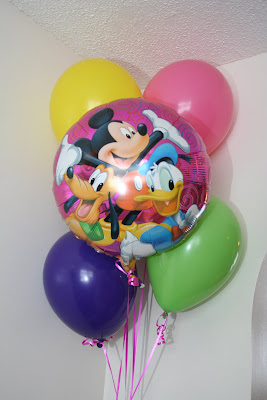 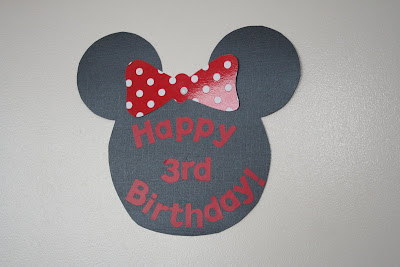 This was not what I had originally planned to do, this was my "Oh my god it's 2am and her party is tomorrow morning!!" make due thing... I had wanted to cut out a whole bunch of circles like I did for Ellie's sign, but time slipped away. 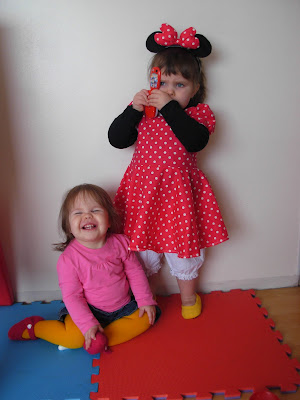 This was her Halloween Costume, when I made it I had this party in mind. She LOOOOVES Mickey Mouse Clubhouse with a passion, she'd watch it from the minute she woke up, till she went to bed if you let her. Ellie was Daisy Duck for Halloween, and I wanted her to sort of be a toned down version of her at the party, but I couldn't find the beak and headband with bow I made her at Halloween.... but that's what's up with the crazy yellow tights. 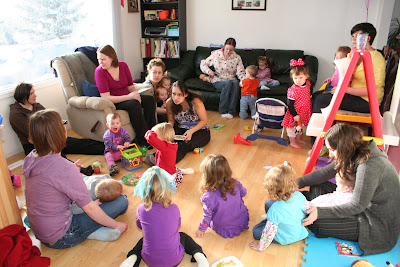 We had quite the turn out though, it was a great party!
And she didn't take that dress off for TWO days! She'd still be wearing it if I hadn't wrestled it off of her for her bath, LoL!

Scribbled by JeolsliesMomma at 5:02 PM No comments: 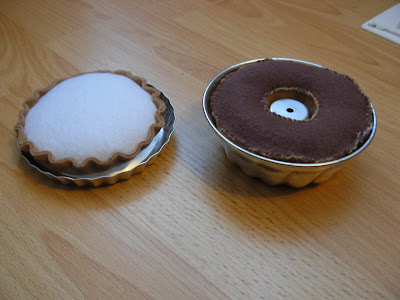 It was my older daughter's 3rd birthday on Tuesday! My mom sent her some Ikea dishes for her play kitchen, since she loves to "make us cakes" all the time. I made some felt items to fit perfectly into the pans for her. I left them kind of plain so she could "decorate" them herself with scraps of fabric or other play food. 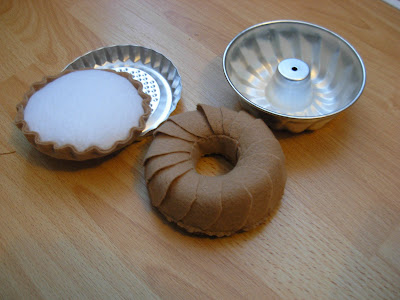 It was my first attempt at felt food. I don't have any of that lovley wool felt, it was just plain old polyester felt from Michael's (if that's what it's made with?)

Scribbled by JeolsliesMomma at 4:51 PM No comments:

A Giveaway at The Provident Woman...

The Provident Woman is having a knife giveaway! I signed up for Tasty Kitchen (PW's site!) and she popped up with a message like two seconds later, I'm not sure how she did that, lol, but I'm glad she did. I haven't had much time to check her site out yet but I'm off to do that right now.
Scribbled by JeolsliesMomma at 12:02 PM No comments: